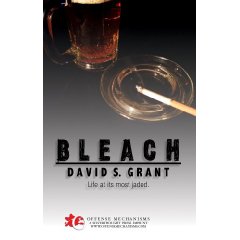 + half
Reviewed by:  Gary Mack

This raw, irreverent, raunchy, and vile saga on the party exploits of a Harvard graduate and his nitwit friends reads like the daily script from a Howard Stern radio show. With most of the dialogue beginning with the word, “Dude”, and the scenes taking place inside Wisconsin bars, the dual novel, “Bleach/Blackout,” is limited in its scope to character observations and juvenile sex talk. Though David S. Grant’s intent is to parody the social circuits of our latest generation, there are only so many tavern and sex scenes one can take in a row! On top of that, with the amount of legal and illegal drugs the main character popped in his mouth, I felt like I lapsed into a drug-induced coma by the fifth chapter.

It’s clear that Grant has the ability to be funny but he doesn’t know when to stop. He often over uses a line, like when he makes an observation about a woman at the airport who claims she will only drink Starbucks. The first time around, the insight left me with a scant chuckle. After the airport scene, every time a person ordered a coffee in the book, I had a strong hunch that the next line was going to make some reference to Starbucks. How funny can that be the tenth time around?

There are many other instances of this overplay, like the constant jabs at the band, “Wham,” George Michael, Gap shirts and married homeowners. Worst of all, there’s a running commentary from the narrator, though you clearly know it’s the author’s view, on the post 9/11 terror alerts. These attempts at satire sorely stick out and are as butchered as a joke on amateur night.

Grant decides to write the story in the first person present tense – always the most difficult of tasks. Often he mixes his verb tenses, like when his friend is shot and he writes, “… she was dead by the time she hit the floor.” Interspersed within the story are past tense vignettes on the drinking, smoking, and sexual exploits of the gang at New Year Eve parties. Though the parties are chronicled by the year, to me, they all seemed pretty much the same.

Without a plot, the ending is a stretch. Though Grant is capable of writing believable conversations and he flushes out his characters fairly well, his writing lacks any lyrical or metaphorical buoyancy.

Simply put, this is not a novel that emerges on any front. Yes, Mr. Grant shows glimpses of brilliance and wit but he needs to contain himself and polish up his craft before he publishes again.