Interview with Elizabeth Fountain, author of ‘An Alien’s Guide to World Domination’ 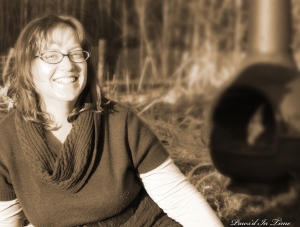 Elizabeth Fountain left a demanding job as a university administrator in Seattle to move to the small town of Ellensburg, Washington, and pursue her dream of writing novels.  She started writing in grade school; fortunately, most of her tortured high school poetry and song lyrics are lost to posterity. Her first book was five years in the making, and offered lots of opportunities to give up along the way; that might be why it’s a tale of people, aliens, and dogs who face the impossible, and do it anyway.  An independent publishing house in Calgary, Champagne Book Group, released the novel in April. Now Liz has three more novels in progress. She takes breaks from writing to teach university courses, spend time with family and friends, and take long walks while leaning into the diabolical Kittitas valley wind.  She holds degrees in philosophy, psychology, and leadership, which contribute to a gently humorous view of humanity well suited to tales of aliens and angels, love and death, friendship and dogs. Liz strives to live according to a line from British singer-songwriter Chris Rea: “Every day, good luck comes in the strangest of ways.”

Her latest book is An Alien’s Guide to World Domination.

Visit her blog at www.lizfountain.wordpress.com or become her friend at Facebook at https://www.facebook.com/ElizabethFountainAuthor. 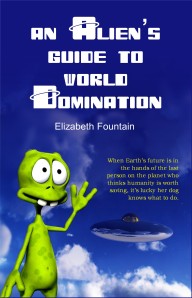 Louise Armstrong Holliday is the last person on Earth you’d expect to save the human race. But when she uncovers proof that her boss is an alien the color of lime jelly gone horribly wrong, and is at the center of a plot to destroy humanity, Louie decides to do exactly that. She begins a journey from her company’s suburban Seattle office park to the old cities and castles of Eastern Europe. Along the way, Louie is attacked by flying books, overly-sensitive bat-crow monsters, and her own self-doubts. She must learn the truth about her closest friend, stand up to her boss, confront her oldest enemy, and make peace with her Aunt Emma, who annoys her in the way only true family can. She also has to rely on Buddy, the little blind mini-Schnauzer who saves her life twice – and really is from Mars.

Purchase your copy at AMAZON.

Could you please tell us a little about your book?

An Alien’s Guide to World Domination was published by BURST!, the sci-fi/fantasy imprint of Champagne Book Group, in April. It’s the story of Louise Armstrong Holliday, the last person on Earth you’d expect to save the human race. But when she uncovers proof that her boss is an alien the color of lime Jell-o gone horribly wrong, and is at the center of a plot to destroy humanity, Louie decides to do exactly that. She begins a journey from her company’s suburban Seattle office park to the old cities and castles of Eastern Europe. Along the way, Louie is attacked by flying books, overly-sensitive bat-crow monsters, and her own self-doubts. She must learn the truth about her closest friend, stand up to her boss, confront her oldest enemy, and make peace with her Aunt Emma, who annoys her in the way only true family can. She also has to rely on Buddy, the little blind mini-Schnauzer who saves her life twice – and really is from Mars.

Did something specific happen to prompt you to write this book?

I’d struggled with this story for a while, trying to craft a realistic, serious novel. Then, after a conversation with a good friend in 2008, I dreamt about two people standing on a bridge in a faraway city, one telling the other he’s really an alien. When I woke up, the plot of An Alien’s Guide took form in my mind, as I realized the story needed to take place in a world like ours, only different. In this world, aliens are real and all around us.

What cause are you most passionate about and why?

After the horrific bombing at the Boston Marathon in April, something became very clear to me: we need more love, less hate. All the important causes in our world boil down to this simple equation, I think. More love for one another, for our planet, for all the critters we share it with, more love for peace, and more love for ourselves. It’s essential for me to write stories that help tip the balance toward more love, and less hate.

In the last year have you learned or improved on any skills?

I’m going to cheat just a little, and use the last year and a half since I moved to the small town of Ellensburg. Since then I’ve learned to:

What are you currently working on?

I have three more novels in progress! You, Jane is the tale of Jane Margaret Blake, whose ability to write stories that come true in the real world creates havoc for her friends and her love life. In her stories, animals, humans, spirits, angels, and even the Universe itself conspire to destroy Jane’s last chance to be with her old love, or, just maybe, to bring her an opportunity for new love. As her writing and her drinking spiral out of control, Jane must face reality about herself and her relationships, and discover her ability to write her own happy ending. The Life and Death of Saint Guineford explores what happens when Death wants to take early retirement, and offers Guinn a deal she can’t refuse: take over the job of helping souls cross the barrier to the afterlife, and absolve herself of the guilt of inadvertently causing a girl’s death. The hitch? She can’t touch the man she loves, or he’ll die, too.

And, I’m finishing the manuscript I started in 2012’s National Novel Writing Month, my first try at a novel-length work for middle-grade readers. The Law of Immediate Forgiveness is about Amy June Pilgrim, who is halfway through her twelfth year and desperate to prove she’s not a little kid anymore; and her Grandpa Marq, who leads a crack team of misfit computer and math geeks on the hunt for the mathematical formula for immediate forgiveness. If they find it, the world will be freed from war, violence, and suffering, so it’s no wonder so many people want to stop them. Amy June finds herself on a cross-country trek with her Grandpa, facing enemies real and imagined, longing to be reunited with her father who disappeared five years earlier, and finding the unconditional love of a black Lab whose well-timed dog fart helps foil Amy June’s kidnapping. Together they discover the true formula for forgiveness, triggered by the love of a dog.

Meanwhile, my short story Heaven, about a renegade angel and the human woman he falls in love with, will be published in a compilation from Champagne Books later this summer. There’s romance, and even a little sex, in that one!

What do you feel sets this book apart from others in the same genre?

This story is relentlessly and recklessly optimistic, when so much in our world begs us to give in to cynicism or pessimism. Louise Armstrong Holliday, our heroine, struggles mightily with self-doubt and the temptation to give up; but at her core, she’s as much of a reckless optimist as her friend Jack, who accompanies her on her adventure to save humanity from the stupid but brutal aliens. Even the villains retain their goofy positive spins on things. In this day and age, it seems somehow profoundly courageous to be an optimist. Oh, and the fact that it’s Louie’s dog who really saves the day – after all, isn’t that what dogs do? Dogs save us humans from our own worst tendencies, just by offering unconditional love and acceptance.

What is the most important lesson you have learned from life so far?

It would have to be the motto I use on my blog/website: “Every day, good luck comes in the strangest of ways.” It’s a line from a song by the amazing singer/songwriter Chris Rea. If we pay attention, it’s absolutely true. There’s a little gem of good luck in each and every day. We’ve just got to get our human egos out of the way to see it, sometimes.

My bit of good luck for the day: Today it turned scorching hot in our town, nearly 100 F. My friend J. has cerebral palsy which makes it tough to get around on good days; his body has to work extra-hard to balance, stand, walk, anything. He loves jelly beans, and my job is to provision him with them at least once a week. Well, today I was able to put a smile on his hot and sweaty face by giving him a bag of that sweet sticky candy. Of course the next thing he said to me was, “Do ya think that’s enough to last a whole week?” As a writer, my job is to touch people with stories; my friend J. touched me this blazing hot day with his humor.

One response to “Interview with Elizabeth Fountain, author of ‘An Alien’s Guide to World Domination’”