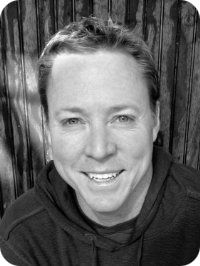 Jeff Gunhus is the author of both adult thrillers and the Middle Grade/YA series, The Templar Chronicles. The first book, Jack Templar Monster Hunter, was written in an effort to get his reluctant reader eleven-year old son excited about reading. It worked and a new series was born. His book Reaching Your Reluctant Reader has helped hundreds of parents create avid readers. As a father of five, he and his wife lead an active lifestyle simply trying to keep up with their kids. In rare moments of quiet, he can be found in the back of the City Dock Cafe in Annapolis working on his next novel.

His latest book is the thriller/horror novel, Night Terror.

Can you tell us what your book is about?

It’s been ten years since Sarah Tremont her abduction and attempt on her life in the caves under Prescott City and she and her family believe the nightmare is behind them. However, a new evil has sensed the power of her gift that’s more insidious that anything she 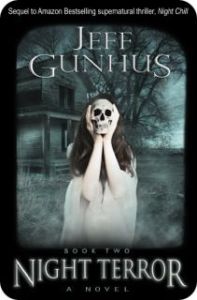 faced before. It quickly becomes clear that a new nightmare is just beginning.

Why did you write your book?

Night Terror is the sequel to my first adult novel, Night Chill. I really loved the characters and left the first book open for a sequel. Overall, the books reflect my own paranoia about my responsibility as a father to keep my family safe.

Are you consciously aware of the plot before you begin a novel or do you discover it as you write?

I also write screenplays which are highly structured and I’ve taken some of those work habits into novel writing. I think in terms of act structure and create an outline. However, the real fun of writing are the surprising detours the book takes along the way.

Have you suffered from writer’s block and what do you do to get back on track?

The closest I come to writer’s block is deciding which project to do next. I’m facing that right now, actually. I have two books coming out in October, one adult and one middle grade/YA, and I just completed edits for a rerelease of my novel Killer Within that was acquired by Thomas & Mercer, so I’m thinking about my next project. There are five different books I want to write and I can’t seem to choose between them. Once I get going though, I rarely get blocked.

Can you tell us about your family?

I have five kids so my wife and I spend most of our time barely keeping up with the chaos. The kids like the Jack Templar books and they all have cameos in the books.

What do you like the most about being an author?

I love when people read my stuff! Even if they don’t like it, the idea that we can have a conversation about a setting and characters that were once only in my head is nothing short of magic.

What kind of advice would you give other fiction authors?

I reread Stephen King’s On Writing at least once a year. All the advice I give writer’s really comes from that book. The greatest advice is that writer’s write. You have to put your backside into a chair and write. Every. Day. On top of that, you have to read a lot. King says if you don’t have time to read then you don’t have time to be a good writer. I buy into that.