Interview with J.J. DiBenedetto, author of The Dream series

J.J. (James) DiBenedetto was born in Yonkers, New York. He attended Case Western Reserve university, where as his classmates can attest, he was a complete nerd. Very little has changed since then.

He currently lives in Arlington, Virginia with his beautiful wife and their cat (who has thoroughly trained them both). When he’s not writing, James works in the direct marketing field, enjoys the opera, photography and the New York Giants, among other interests.

Sara Barnes thought her life was perfectly ordinary – until the night she began stepping into other people’s dreams. 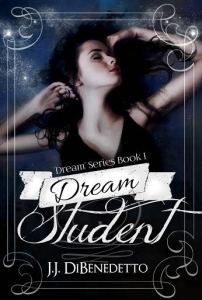 Follow Sara as she learns to cope with this extraordinary gift (or curse) in the Dream Series:

It’s bad enough that, thanks to her supernatural talent, Sara is learning more than she ever needed to know about her friends and classmates, watching their most secret fantasies whether she wants to or not. Much worse are the other dreams, the ones she sees nearly every night, featuring a strange, terrifying man who commits unspeakable crimes. Now Sara wonders if she’s the only witness to a serial killer – and the only one who knows when and where he’s going to strike next.

Medical school and life as a newlywed would be enough by themselves for anybody to handle. But Sara’s got another problem – her dreams have started up again. Almost everyone at the medical school is dreaming about the death of the school’s least popular teacher, Dr. Morris, and once again, Sara finds herself in the role of unwilling witness to a murder before it happens. But this time, there are too many suspects to count, and it doesn’t help matters that she hates Dr. Morris every bit as much as any of his would-be murderers do.

Sara thought she had made peace with her dreaming talent, but she’s got a surprise coming: her four-year-old daughter has inherited it, too.

Unraveling a mystery with lives on the line is difficult enough under the best of circumstances. But when Sara has to view all the evidence through the eyes – and dreams – of a toddler, it may be an impossible task.

What made you decide to become a published author?

I’ve been writing since high school, but I only got serious about the idea of publishing in the last 3 years or so. After a friend published her first novel, I decided “why not me, too?” and got to work!

Would you consider your latest book to be a one of a kind? How so?

I’m not sure if it’s one of a kind, but I think my Dream Series has it’s own niche – it sits on the border of several genres: paranormal, romance and mystery, and those are all combined with the everyday challenges of life.

Where is your writing sanctuary?

My bedroom (although my cat thinks it’s HIS sanctuary too!)

What is one thing you learned about your book after it was published?

I learned that no two people see it the same way. And that things I thought were very clear and obvious, sometimes weren’t!

Did any real life experiences find their way into your book?

Totally! The books take place in the real world (except for the part about the psychic dreams, of course!), and places I’ve lived and visited have become locations in the books. And people I’ve known have become “background extras” on occasion, too.

Aside from writing, what’s your passion?

I love the opera, and at some point I want to take a trip to Europe and visit three or four cities and see an opera in each of them. I just have to talk my wife into a trip like that (she’s like most sane people – she’d rather visit one place rather than a whirlwind tour like I’m thinking of!)

What’s next for you?

I’ve just published the tenth and final book of the Dream Series, so I’m working on my next project. I’ve actually got two books started and a third that I’m trying to figure out how to start writing. One’s a more traditional romance novel, one is an adventure along the lines of “Romancing the Stone” and the third, I’m not really sure what it even is yet!