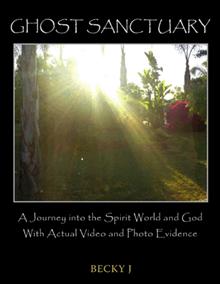 Ghost Sanctuary is a factual accounting of a family’s struggle with ghosts living in their home. The book explains in detail the happenings faced by the family and their reaction to the invasion of the spirit realm into their own. The book contains fascinating photo and video evidence of what the family has and continues to experience. The author identifies how her own belief in God and the afterlife has helped her to overcome and understand the trials and tribulations of her family’s ordeal.

Becky J. is an equestrian lover and spends her days in Western activities, teaching, riding, training, and breeding horses. For more information about her unusual nonfiction tale, please visit www.GhostSanctuary.com.

New York real estate broker Miriam Lewis takes off for a brief getaway to a remote inn on the rugged cliffs of Cornwall. Rest and romance with her boyfriend seem like the perfect cure for a life that appears to be going nowhere, and too fast. Entering Cornwall, Miriam crosses the River Tamar and glimpses a luminous girl floating in the river. A memory from long, long ago begins to unfold in Miriam’s thoughts—something about a promise she made to perform a selfless act of courage. Could it be true? Could she ever rise to such heroism or is it just a hallucination? While at the inn, Miriam experiences a series of flashbacks from a life she lived in an ancient land called Ruberah. These startling images convince Miriam that she did write the promise and that she must keep it. But to do so, Miriam will have to let go of everything in her life and place her trust in a guide—the river girl—the wise and eternal spirit of the River Tamar.

Who is your favorite character from the book?

Miriam who longs to be in a loving relationship with Mitch. Miriam fears aging and the possibility of growing old alone. A little overweight, she struggles to take the pounds off only to binge eat to feed her emotions and pack them back on. Miriam is strong, humorous, and painfully vulnerable.

–Interview at The Book Connection

This was a really great YA Fantasy book and even adults will love the whole story behind this amazing book.

Three things I keep in mind as I write in the paranormal romance genre.  1) The romance drives the story… 2) Build strong characters with realistic conflicts… 3) Know the mythology upon which you base your story. Or create one….

Who is your perfect hero and why? Mr. Rochester of Charlotte Bonte’s Jane Eyre. Damaged and tethered to an insane wife hidden in the attack, Edward Rochester remains unlovable and unforgivable for his treatment of Jane until the end. Then in the exquisite language of Charlotte Bronte, he comes shining through. “I’ve longed for thee, both with soul and flesh …” Mmm!

HOW I CHOOSE THE SETTING FOR MY NOVELS My second novel, Written in Ruberah is set in Cornwall, England, where I was born and raised. In this book I wanted to explore the character of Tamara, a beautiful nymph from an old Cornish legend whose father turned her into a river of tears, which formed the River Tamar.

Without giving anything away, what would you say is a pivotal point in the book?

The main character Miriam longs to be in a committed relationship with her boyfriend Mitch, but she can’t realize that love due to a debt she carries from Ruberah. Miriam, a down-to-earth real estate broker from New York City, is skeptical of past lives, time travel, and water spirits, until she meets a blood relative from a life she led in ancient Ruberah. This brings a rush of love and memories as close and as real to Miriam as her own breath.

Paranormal romance? Best oxymoron yet?
Paranormal romance? Best oxymoron yet? Let’s vote on that.In the recent movie Her, Amy Adams’ character says falling in love is like legalized insanity. I’m down with that. What do you think?Would you call yourself an “into the light or into the dark” writer?I’d slot myself into light side, however I rouse around in the dark a lot in both my novels. 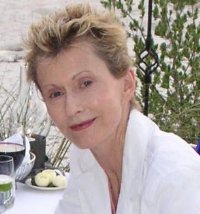 Christina Greenaway grew up in Cornwall, England in a small fishing village. One of her favorite pastimes as a child was to write a story, stuff it in a bottle, toss it into the sea, and imagine all her characters – pirates, kings, and others – come to life. Her life twisted and turned, however, in so many ways that she never ventured into writing until now, many years later. Her novels include themes generated from her life experiences including: trust, the fantasy parent, empowerment, work and travel and spiritual power.
Christina has worked at BBC radio in England, a NYC high-powered ad agency, as assistant to the president of a perfume company in France, as a partner for a frog farm in Costa Rica, and numerous other venues. She has traversed the globe.  She is the author of Written in Ruberah, published by Girl by the Sea Publishing, and Dream Chaser: Awakening, published by Girl by the Sea. You can visit Christina at www.christinagreenaway.com or her blog at http://christinagreenaway.wordpress.com.

ABOUT THE LORDS OF HANRAHAN

Title: The Lords of Hanrahan

Rumors circulate that the old McPherson place a couple of miles outside of Framingham, Connecticut, is haunted. But one summer day, fourteen-year-old Laura Mueller and her three friends summon the courage to go there. Just because old man McPherson committed suicide there a couple of years ago at age ninety-three doesn’t mean it’s been overtaken by ghosts. But Laura has no idea what the old house has in store for her in the future, and it’s not going to be a pleasant experience. That house, which haunts unsuspecting young women when they are the most vulnerable, chooses Laura to receive its horrific powers. Worse, it waits until the opportune time—years later, when she’s married and is expecting her first child. When she is seven months pregnant, Laura is summoned back to the old McPherson place by some mysterious and evil force. Held captive in a strange place, she wonders if she’ll ever find her way back to her former life.

Darrell Tooker served twenty years in the US military and is a retired maxillofacial surgeon. He also drove the Friendship Boats at Walt Disney World for ten years, retiring in 2008. Tooker now lives in Clermont, Florida, with his wife, Jennie.

Pump Up Your Book and Darrell are teaming up to give you a chance to win a $25 Amazon Gift Card!

New MG/Tween Paranormal E-Book for Review: A Pirate, a Blockade Runner, and a Cat by Beverly Stowe McClure

Beverly Stowe McClure will be touring from October 7 – 31, 2013 with her middle grade/tween paranormal e-Book, A Pirate, a Blockade Runner, and a Cat. We are looking for reviews, interviews, guest post spots, book trailer reveals, and book spotlights. Please mention how you want to host this author and provide three dates that would work for you when inquiring.

Thirteen-year-old Erik Burks’ life is falling apart. When he discovers a lace bra in the glove compartment of his dad’s car, his mom leaves his father and drags Erik from being king of the hill in Texas to the bottom of the pits in South Carolina. No Dad, no baseball, no friends, just Starry Knight (a girl who reads minds) and her equally weird brother, Stormy, the twins that live down the block.

Just when Erik thinks life can’t get any worse, while hanging out at the beach one evening, he and the twins notice lights radiating from the lighthouse. The only problem is the lighthouse was deactivated years ago. Stranger still, a ship materializes in the moonlit harbor. Curious, the twins and a reluctant Erik investigate and discover the ghost of a blockade runner, a phantom cat, and a pirate who prowls Charleston Harbor, all searching for rest.

A former nonbeliever in the existence of ghosts, Erik cannot deny the proof before him. And he has a revelation: The ghosts may be the answer to his desire to return home. Erik soon makes a deal with the ghosts. He’ll help them find what they’re looking for so their spirits can rest in peace. In return, the ghosts will scare Erik’s mother so she’ll be on the next flight back to Texas. Star thinks his plan stinks, but Erik wants his life back, even at the cost of his mother’s sanity.

If you would like to review this book or host the author during her virtual book tour, please contact Cheryl Malandrinos at ccmal@charter.net.

New Book for Review: Paranormal ‘The Lost’ by Caridad Pineiro

Adam Bruno is no ordinary millionaire. The heir to an ancient race possessing a dark, powerful magic, he can shapeshift and create energy. His gifts make him a living weapon and have forced him to live in seclusion. But now an inhuman force hunts down Adam-just when he finds someone who makes him feel more human than he ever imagined possible . . . Home from combat in Iraq, Bobbie Carerra wants only peace, yet soon joins Adam in a terrifying battle against paranormal enemies who hide in plain sight. She’s drawn to his strength of mind and body; he’s attracted to her courage and intoxicating energy. Their scorching passion can either transport them to the heights of ecstasy or-if Adam’s powers rage out of control-destroy them. But when an invisible brotherhood tightens its nets and someone Adam trusts betrays him, only a heartrending decision can save them.

If you would like to review The Lost, please click here to fill out the form or email Dorothy Thompson at thewriterslife(at)gmail.com. Deadline for inquiries end June 25 or until the tour is filled. Thank you!