United in Hate: The Left’s Romance with Tyranny and Terror 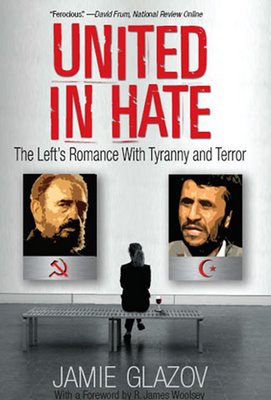 Once I was involved in a business partnership with a talented and seasoned salesperson. Often we teased my partner he was so good at what he did he could sell all the swampland in Florida. The man knew he was good at his trade and reveled in all the tricks he learned to perfect his pitch. Oddly enough, whenever a salesperson came to our office to pitch a product, my partner, so knowledgeable of his craft, easily succumbed to the tricks of his trade. He was always the first to sign on the dotted line. I could never understand that.

After reading, United In Hate, The Left’s Romance with Tyranny and Terror, by author Jamie Glazov, I’m beginning to grasp an understanding on the phenomena of such thinking. I understand a little more how certain individuals, or entire groups, can be so close to something they cannot recognize when the tricks of the trade are being used against them. In the case of the Left, as Glazov points out from his opening chapter, it’s as if the “believer” is so close to knowing what they hate, they somehow fall in love with it. It’s just a matter of how the cause is packaged and sold to them.

For instance, if you were to announce on the “View”, to the hosts and audience, that a mystery guest was about to appear who was a mass murderer, a theocrat, a racist, a bigot, a sexist, a torturer, and a homophobe, the set of the show would instantly be filled with angry boos and jeers from the crowd. However, when the identity of the guest were to be revealed as Fidel Castro, the knees of the female hosts would suddenly quiver and an about face would occur. Barbara Walters would be the first to her feet to greet the great Leftist Dictator. The crowd would follow, taking her lead on giving Castro a standing ovation. Within minutes after the applause died down, movie pals Steven Spielberg and Francis Ford Coppola would greet their little darling via speaker phone. (Again, it’s all in the packaging. Those who work in a business of illusion and deception are easily deceived.)

As Glazov candidly points out, when it comes to the Left, Castro could easily be replaced by the likes of Lenin, Stalin, Pol Pot, Pham Van Dong, Mao Tse Tung, Ayatollah Khomeini, Osama Bin Laden, and the newest darling of the Left, the world’s most charming homophobe, Mahmoud Ahmadinejad. These are their heroes, their leftist idols. It doesn’t matter that their heroes represent and encompass all that the Left hates. The Left is easily sold, easily caught up in the imagery and mystique, easy marks for despot trickery whenever one of their intellectuals arrives in the country of their autocratic friend. All a dictator has to do is clean up a town, dress up the townsfolk in totalitarian wear, and threaten the lives of the people if they don’t look happy while the conspicuous visitor is in town. Wow. How many times does that trick have to be done before the Left catches on? Yet you wonder how did Susan Sontag, Mary McCarthy, Walter Duranty, George Bernard Shaw, Sean Penn, Harry Belafonte, Jane Fonda, Ernest Hemingway, Danny Glover, and a host of other western intellectuals or entertainers fall for the same scheme?

What’s worse is their glowing testimonials after their visits. It’s as if these great thinkers or performers go back to high school to write of their first love. I was squeamish and embarrassed reading the passages Glazov used to illustrate and drive his point home. Unless you are stupid, or love struck, how could all the monsters of tyranny possess such sweet and unassuming qualities as reported by the Left?

Does anyone still remember the 1981 film, “Reds”, by Warren Beatty? What a perfect example of what Glazov speaks of. Back then, as a student, I wanted to puke over the manufactured sentiment over the flick, a film many of Beatty’s associates were hailing as a masterpiece. In the most overused scene in cinematic history, Jack Reed, the protagonist prepares a meal for the married woman he loves and stole from an American capitalist. In the scene, the water in the pots boils over, smoke billows from the oven, and Reed clumsily trips around the kitchen as the romantic little communist nervously tries to prepare a meal for his girlfriend. Geez Warren. That’s an original and uncontrived scene! Such masterful film making is certainly deserving of an Oscar.

Even then I thought, is Beatty willing to give up his glamorous American Hollywood life for the meager lifestyle of the Russian peasant? It certainly appeared from the point of view of the film he was selling the Soviet or Bolshevik way of life. History has certainly proven Beatty’s romance to be false and has certainly proven he was easily sold by his leftist comrades.

Glazov’s well thought out and carefully sculpted narrative of our times is an in-your-face expose on the hypocrisy of the Left. Glazov will take a lot of heat for what he reveals but he seems like a man with broad shoulders ready to take on the burden of a good fight. He’s professional in his presentation and his arguments are clean and succinct. Based on what he’s written, there’s little doubt in my mind that if an alien ship arrived in America, most of our Leftists, from Springsteen to Spielberg, would beg to be taken away. After paying homage to our captors, and after paying their way to the front of the lines, they would get on their knees, with their arms stretched out in the direction of the sinister ship. Then they would chant, “Free us from our freedom! Free us from our freedom” over and over, hoping to be heard.

Unable to stop themselves, and always desperate for attention, our Leftist friends would continue to chant while boarding the ship, knowing they could never return, and knowing a life of darkness would be all they would ever know again.